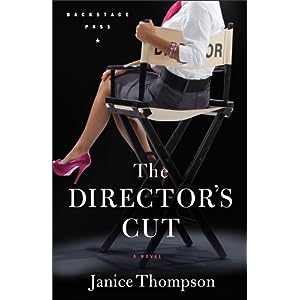 Tia Morales is used to calling the shots. She’s the director of the popular sitcom Stars Collide, and her life on set is calculated and orderly. Well, most of the time. But her life outside the studio is another matter. If only she could get her family to behave as well as her stars do! When she starts butting heads with handsome camera operator Jason Harris, it’s enough to send a girl over the edge. Will she ever learn to let go and take life–and love–as it comes?

Full of the humor and crazy family dynamics Janice Thompson fans have come to love, this colorful story gives readers an inside look at Hollywood and a healthy dose of romance.

When I went to the mailbox Monday, there were two packages in it. The bigger of the two was from Baker Publishing. I thought what on Earth are they sending me? And then I opened it.

And had to stop myself from jumping up and down right there on the driveway – there were construction workers next door, after all.

I had other things I needed to do, but we all knew I’d crack it open as soon as I had a chance.

And so. both before and after a trip to Chick-fil-A with the kids to celebrate the end of school, I read The Director’s Cut. And incidentally, I discovered yesterday Janice also loves CFA :D.

The Director’s Cut is the third [and sadly, final] book in Ms. Thompson’s Backstage Pass series. It began with Stars Collide and continued with Hello, Hollywood. All three center around the Stars Collide television sit-com. In the first book it was the lead actor/ress. The second book revolved around two of the writers and this one is about Tia Morales, the director, and Jason Harris, one of the cameramen.

As always, Janice creates a cast of unforgettable characters, mostly Tia’s family, in this case. Characters from the other books abound – including one or two that originally showed up in her excellent series Weddings by Bella, particularly superstar Brock Benson. Rex and Lenora are a shining example of what love can be like. And the humor is Trademark Thompson.

Ms. Thompson uses her knowledge of Hollywood to show all of us the world most of us will never see. She also brings us into different parts of the LA area, bringing them to life.

I’ve mentioned it before [and I believe I even used Janice’s Weddings by Bella as an example], but I’m a sucker not just for the HEA [that’s Happily Ever After for those of you unfamiliar with the abbreviation ;)], but for a tidbit or slice of life afterwards. Not just the wedding, but a bit of a view into their lives in the future. A day, a week, a month, a year, whatever, after the wedding [or the kiss or the proposal or the… whatever].

It doesn’t detract from the book, though, and I thoroughly enjoyed it and it will make its way onto my shelf [after my sister takes it home tonight to read it] and onto my annual ‘to reread’ list.

Thanks to Janice and Revell for an influencer copy of this book. The opinion, however, is my own.