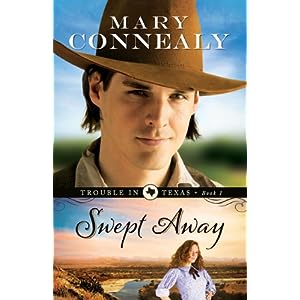 Laughter, Romance, and Action Abound in This New Series from Mary Connealy

Swept away when her wagon train attempts a difficult river crossing, Ruthy MacNeil isn’t all that upset at being separated from the family who raised her. All they’ve ever done is work her to the bone. She prayed for a chance to get away, and then came the raging flood. Alive but disoriented, she’s rescued by Luke Stone…so unfortunately, there are more chances to die in her immediate future.

Luke is heading home to reclaim the ranch stolen from his family. But the men who killed his father are working hard to ensure Luke doesn’t make it alive. He has no choice but to keep moving. Still, he can’t just abandon Ruthy, so she’ll have to come along.

His friends–a ragtag group of former Civil War soldiers–take a fast interest in the pretty gal. Luke thinks that’s rather rude–he’s the one who found her. And the more time he spends around the hard-working young woman who is a mighty good cook, the more he finds himself thinking beyond revenge and toward a different future. For the first time in a long time, Luke is tempted to turn from his destructive path and be swept away by love.

I’ve seen Mary talk about this opening over on Seekerville and it lived up to my expectations. Almost immediately we’re thrown into the river with Ruthy and wondering whether her no good “family” will survive – and will she?

She does of course – or the book would be awfully short. She’s rescued by Luke. Readers of Mary’s Kincaid Brothers series will recognize Luke’s sister Callie as the heroine from Over the Edge, book 3 of that series.

Callie, pregnant then with an infant, was unable to hold onto their family ranch when a bad guy steals it from under her. With nowhere to go, she headed to Colorado to find her husband, Seth Kincaid.

Now Luke has taken it upon himself to get the ranch back. He spent too much time in Andersonville Prison, becoming a Regulator. He’s in the right when he says the ranch was stolen and he can prove it. But the man who’s taken over won’t leave without a fight.

Luke has a group of men he trusts with his life. And now he has Ruthy, too. He wants her to stay home and stay safe. She rolls her eyes and does what she wants – and helps him out in the process.

As always, Mary brings her A game – and she keeps getting better and better. Luke Stone hasn’t replaced Tom Linscott from Sharpshooter in Petticoats as my all-time favorite of Mary’s heroes, but he’s a close second. That says something. A lot of something actually.

In Swept Away, there’s laughter, tears, heart-pounding action and that’s just for the reader. The characters experience all those things, plus love, pain, shoot-outs, rock climbing, and clandestine meetings.

One of the things I loved about Swept Away was that Mary gives us some of the “After” in “Happily Ever After”. She didn’t stop with the first kiss or the proposal or even the “I do” but she gave us a hint of their life together.

Of course, she also gave us the first chapter of book 2 in the series :p.

Since I’m writing this six weeks or so before it’s release, I’ll set it to post early around the official 3/1/13 release date so it’ll ship when you order it. Because you know you wanna. And my paper copy will be here then, too :D.

Thanks to NetGalley and the publisher for an ecopy in exchange for my honest review.