Book Review: Flight of the Earls by Michael K. Reynolds 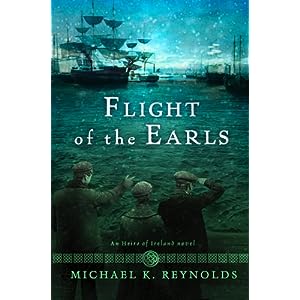 It’s 1846 in Ireland. When her family’s small farm is struck by famine, Clare Hanley and her younger brother, Seamus, set out across the ocean to the Promised Land of America.

Five years prior, Clare’s older sister Margaret and her Uncle Tomas emigrated in similar fashion and were not to be heard from again. But Clare must face her fears as she lands in the coming-of-age city of New York. There she discovers love, adventure, tragedy, and a terrible secret which threatens to destroy her family and all she believes.

Flight of the Earls is the first book in a historical novel trilogy based on Irish immigration in the 1840s.

I had the privilege of meeting Michael at the ACFW conference earlier this year and of “watching” him work in the #1K1HR group on Facebook. He’s a super nice guy and I jumped at the chance to read his debut novel.

The book is told, mostly, from Clare’s point-of-view. There’s a few others in there, but we see virtually everything through her eyes.

Life is hard in Ireland with the potato crops failing regularly and all. Clare, her brother and a friend are all sent to America to make their way and send their wages back to Ireland to help the rest of the family.

The passage is difficult, more so than most, I’d imagine, but they make it. Once there, their lives take a series of unexpected twists and turns. We’re never told quite everything that happens to Seamus and their friend, Pierce.

As an avid reader, I thoroughly enjoyed Flight. As an avid reader of mostly romance, I wished for a bit more of that side of the story, and, was conflicted at first over the ultimate romantic partner for Clare. There were several possibilities throughout the book. The romantic – and romance author – in me wanted one choice, but for many reasons the one she ultimately ends up with is the best choice.

This is book 1 in the series. I’m not sure who books 2 and 3 follow, but I know who I hope it is. Seamus perhaps? The non-final love interest? Both of those, and a couple of others, would be good.

Nevertheless, Michael kept me “turning pages” way into the wee hours of Boxing Day [aka: the day after Christmas], way past my bedtime. Twists and turns abound and the ending is, ultimately, quite satisfying. Real life intrudes at times – the realities of the potato famine, corrupt officials, etc. are harsh and, mostly, unforgiving. As much as I wish everything would turn up roses, it doesn’t in real life, and it doesn’t in Flight. But enough does to keep the reader smiling by the end.

I did come to tears a couple of times – the first being a few chapters in with the hair incident. As someone who cried over more than one haircut, I can relate to Clare’s feelings and I do wish Michael would have come back to it a bit more at the end.

I’m keeping on eye on NetGalley for the next one already :). And on Michael’s Facebook page for updates.

And for Michael at conference next year. Because he had chocolate.

Thanks to the publisher and NetGalley for providing an ecopy in exchange for my honest review.