Book Review: Be Still My Soul by Joanne Bischof 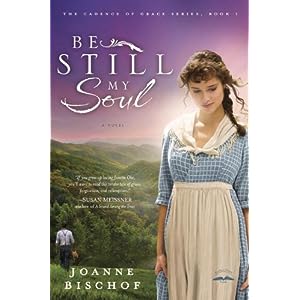 Night’s chill tickled her skin. Lonnie pressed her hands together and glanced up. He was even more handsome up close. Having grown up the shy, awkward daughter of Joel Sawyer, she’d hardly spoken to any boy, let alone the one who had mothers whispering warnings in their daughter’s ears and fathers loading shotguns.

Pretty Lonnie Sawyer is shy and innocent, used to fading into the background within her family, and among the creeks and hollows of the Appalachian hills. Though her family is poor and her father abusive, she clings to a quiet faith.  But when handsome ladies’ man and bluegrass musician Gideon O’Riley steals a kiss, that one action seals her fate.

Her father forces her into a hasty marriage with Gideon—a man she barely knows and does not love. Equally frustrated and confused by his new responsibilities, Gideon yearns for a fresh start, forcing  Lonnie on an arduous journey away from her home in Rocky Knob.

Her distant groom can’t seem to surrender his rage at the injustice of the forced matrimony or give Lonnie any claim in his life.  What will it take for Gideon to give up his past, embrace Lonnie’s God, and discover a hope that can heal their two fractured hearts?

Gideon only ever cared about himself. Now that Lonnie is his wife, will he ever be worthy of her heart?

This is my first book by Joanne and I hope it’s not my last.

But not everything in the book is smile worthy.

They say girls marry someone like their dad – and in this case it turns out to be scarily true. Or does it?

Lonnie grows up with an abusive father and is almost to the point where he’ll let her go live with her aunt instead of at home. Escape is imminent.

Until her father sees Gideon kissing her.

Though things go no further than the kiss [not for lack of trying on Gideon’s part] the two are forced to get married within the next few days.

Lonnie fears she’s married a man just like her father until they [mostly she] is rescued by a kindly farmer and his wife.

This couple works hard to teach both Lonnie and Gideon what a good, God-fearing marriage should be like but it’s not easy. Gideon’s not-too-distant past catches up with him. Is it the end of Lonnie and Gideon or just the beginning of a new life for both of them?

They both have to learn to trust God though Lonnie is light years ahead of Gideon at the beginning of the book.

Ms. Bischof made me cry – more than once but also brought a smile to my face.

Something I didn’t particularly notice while reading but has been niggling at me a bit since is Lonnie’s ‘perfection’. She doesn’t come across as perfect like we’d think of today but in looking back I have a hard time finding any character flaws except maybe she tries to hard to please – to the point of not standing up for herself when she needs to [though, to be fair, this may have been ‘beaten’ out of her by her father in the years prior]. It’s not enough to ruin my enjoyment of the book, but it seemed like pretty much all the character flaws were in a very imperfect hero…

Thanks to Blogging for Books and Waterbrook Multnomah for an ARC in exchange for my honest review.